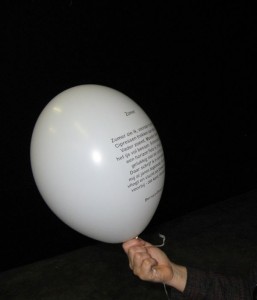 On July 2, 2009, the arts festival Watou opens with an installation of helium balloons, on which poems have been printed by the following poets: Bart Moeyart, Roland Jooris, Joke van Leeuwen, Leonard Nolens, Bart Meuleman and Rozalie Hirs. The poem ‘Wereld van nu’ by Rozalie forms part of the installation and has been integrated into the exposition, which is on display from July 2 to September 6, 2009.