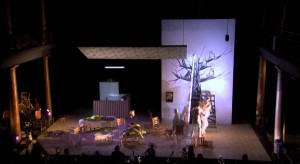 On June 19, 20 and 21, 2011, at the Compagnietheater in Amsterdam, the opera The Cricket Recovers (music: Richard Ayres; libretto: Rozalie Hirs, based on the novel of the same title by Toon Tellegen, 2005) is performed as part of the Holland Festival, by Vocaallab and Asko|Schönberg. The production is directed by Pierre Audi.