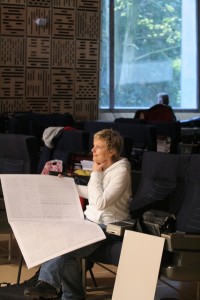 On November 7, 2008, Anke Brouwer and Rozalie Hirs are interviewd by Agnes van der Horst. They discuss the new pieces that they wrote especially for the Dutch Radio Philharmonic Orchestra, premiered this week as part of the Nederlandse Muziekdagen (Dutch Music Days).

You can see the broadcast here on “Uitzending gemist”.