On March 22, 2012, Rozalie Hirs performs her musical compositions Bridge of Babel (2009) and In LA (2003; English version, 2010) and reads poems as part of Stanza, a series of literary events organized by Rámus förlaget, Malmö, Sweden. Other guests include the poets/ performers Eirikur Örn Norddahl, Helena Österlund, and Johan Jönson.

On March 18, 2012, the composition article 4 (2004) by Rozalie Hirs is performed by violinist and violist Heleen Hulst at Stichting Drie plus Twee, Utrecht. 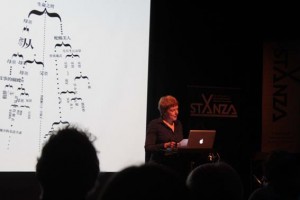 On March 17, 2012, Rozalie Hirs performs three musical compositions based on original texts as part of the performance lecture Rozalie Hirs: New music, new poetry at the StAnza International Poetry Festival. The pieces are Bridge of Babel (2009), In LA (2003, English version, 2010) and Pulsars (2007). Additionally, she reads the poem cycles Who put on my shoes (2010; English translation by Donald Gardner, 2012) and A day (2009; English translation by Donald Gardner, 2012), and talks about her interactive website Geluksbrenger online (2011), which she created in collaboration with visual artist Harm van den Dorpel. The festival is curated by Eleanor Livingstone.

You can listen to parts of the performance here. Here is an interview with Rozalie, conducted by Ryan Van Winkle for the Scottish Poetry Library.